View source
watch 01:36
We're Getting Mutants in the MCU - The Loop
Do you like this video?
Play Sound

$60,000
Deinosuchus (Terrible crocodile) is a large prehistoric reptile from North America. It is an adoptable animal in Zoo Tycoon and Zoo Tycoon 2.

Deinosuchus is a close relative of the modern alligator and represents one of the largest crocodilians known to exist. Large individuals could grow up to 12m (39ft) long and is believed to have had a bite force of over 100,000 newtons, but it differed little in physical appearance to modern crocodiles. Distinguishing features of Deinosuchus included a comparatively broad snout, thick teeth designed for crushing and large osteoderms on its back.

Deinosuchus lived during the Late Cretaceous period, between 82 and 73 million years ago, across various US states as well as Mexico. It is believed to have lived in the large inland sea (known as the Western Interior Seaway) that ran between North America at the time and probably had a lifestyle similar to the modern Saltwater Crocodile. Like most crocodilians, Deinosuchus was likely an opportunistic apex predator and would have been large enough to catch dinosaurs.

Deinosuchus is an adoptable animal in Zoo Tycoon and was added as part of the Dinosaur Digs expansion pack. It is unlocked after beating the Breeding the T. rex scenario, but can also be obtained by renaming an exhibit "Super Croc".

Deinosuchus is an Aquatic animal, requiring a large amount of Salt Water in its exhibit, as well as dirt and brown stone. It is able to co-exist with the saltwater crocodile, with the two sharing similar animations.

With the addition of the Marine Mania expansion pack, Deinosuchus is updated to use tanks.

Deinosuchus is an adoptable animal in Zoo Tycoon 2 and was added as part of the Extinct Animals expansion pack. In Campaign and Challenge mode, it is unlocked when a zoo reaches a rating of 4.5 stars.

Deinosuchus is a Tropical Rainforest animal, but can partially tolerate several other biomes, including the Wetlands, Savannah, temperate forest, and grassland. Like all extinct Tropical Rainforest animals, it requires the Misty Spring in order to be comfortable in its exhibit. Unlike most animals, adopted Deinosuchus individuals are not fully grown. They reach maximum size after two years. 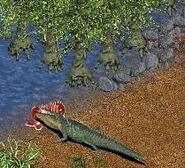 All 6 growth stages. From top to bottom: old, adult, young. Super versions on the rightside.

Male icon, only seen in the Zoopedia. 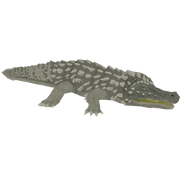