Release all extinct animals into the wild (persistent)

$3,000
The Quagga (Equus quagga quagga) is a medium-sized extinct ungulate from Africa. It is an adoptable animal in Zoo Tycoon 2.

The Quagga is a subspecies of the Plains Zebra native to South Africa. Although very similar in size to other zebras, it was distinguished by the fact its stripes, which were brown and white, were limited to the front of the body - the rear was brown without stripes. The amount of stripes and how far down the body they go varied between individuals. It is possible that the quagga got its name due to its alarm call.

Although believed to have been quite common, comparatively little is known about the quagga's behaviour, although like other plains zebra subspecies, it probably lived in herds. It was extensively hunted by Dutch settlers due to competition with domestic livestock and was hunted to extinction by 1878. The last known individual died at Natura Artis Magistra zoo in Amsterdam, the Netherlands, on August 12 1883.

The quagga is an adoptable animal in Zoo Tycoon 2 and was introduced in the Extinct Animals expansion pack. It is a secret unlockable animal and can be obtained by releasing at least one individual of each species classified as "Extinct" into the wild. Alternatively, individuals can obtained by breeding them back at the research lab by excavating Quagga fossils, which can be achieved at a fossil hunting level of two. Once unlocked, the Quagga is available for adoption once a zoo reaches a rating of 1.5 stars.

The quagga is a Savannah animal, although it is compatible with other biomes such as grassland or scrub. Quaggas behave generally like common zebras, using the same enrichment, shelters and foods. 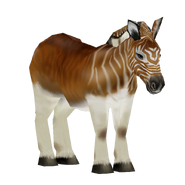 Fansite kit render. Note the texture error on the mane.