View source
watch 01:36
We're Getting Mutants in the MCU - The Loop
Do you like this video?
Play Sound

If you were looking for the Xbox game released in 2013, you can find it here.

Zoo Tycoon is a business simulation game developed by Blue Fang Games and published by Microsoft Game Studios. The focus of the game is to create a successful zoo and try to make a profit out of it. The game was released on October 17, 2001 and 2 expansion packs were released in 2002: Zoo Tycoon: Dinosaur Digs on May 9, and Zoo Tycoon: Marine Mania on October 17 (exactly 1 year after the original game); followed by a theme pack: Zoo Tycoon: Endangered Species Theme Pack on October 30, 2003; a compilation pack: Zoo Tycoon: Complete Collection on August 12, 2003; and a sequel: Zoo Tycoon 2 on November 9, 2004.

In Zoo Tycoon, one of the goals is to keep guests happy. This can be done in a plethora of ways, and can be very difficult to do. The way to please guests is to meet their standards. Guests all have five standards that need to be met: The first is happiness, which is simply a measure of how happy a guest is. This can be changed simply by meeting the other needs of the guests. The second standard is hunger. When a guest gets hungry, they'll go out to get food from a food stand. If a guest's hunger need isn't met, then their happiness will greatly decrease. If enough guests get very hungry, then a message will appear at the top of the screen in red letters that says, "Guests can't find any places to buy food." The third standard is thirst, which is met in a way that is very similar to hunger. However, instead of using a food stand to make this need go down, they have to use drink stands. Just like hunger, if the thirst need gets too high for too many guests, then a red message will appear at the top of the screen that says, "Guests can't find any place to buy drinks." Two alternative messages that can appear are "There are lots of hungry guests." and "There are lots of thirsty guests." The fourth standard is a restroom need. Guests will always need to use the restroom after they're in the zoo for extended periods of time. There are four kinds of restrooms in Zoo Tycoon. One is a small restroom, which only holds about four people, and is available at the beginning of the game. It is a concrete building with a yellow thatched roof. A second restroom is the family restroom, which holds about ten people at a time. It has the exact same design as the small restroom. The third restroom is a part of the Zoo Tycoon: Marine Mania expansion pack, and is called the aquatic restroom. The aquatic restroom is the exact same as the family restroom, only the roof is a turquoise color, and is made of metal. The fourth and final restroom available in Zoo Tycoon is only available from the Zoo Tycoon: Complete Collection expansion pack. It is called the fancy restroom, and it is simply a family restroom, made completely of wood. The fifth and final standard for guests is their energy level. Guests energy level will slowly go down as they walk throughout the zoo. A guests energy level can go back up if they sit down somewhere, like on a bench or on a picnic table. A restaurant can be used to clear out all of the needs that the guests possess, with the exception of happiness.

Zoo Tycoon has had a fair amount of downloadable content made available over the years. These can be obtained

in three ways: One way is by transferring them from a disc onto the computer that has Zoo Tycoon installed on it. Once the downloads have been put on the computer, on the main menu of the Zoo Tycoon game, click the link that says something like "Download New Content." Once there, click the link that says "Check Locally," and browse until you find the file. The second way is to go directly to the "Download New Content" page, and clicking "Check Internet." This requires an internet connection to work. The third way gets all of them at once, but is very pricey. You can just go out and buy Zoo Tycoon: Complete Collection. This gets every download available for Zoo Tycoon, Zoo Tycoon: Dinosaur Digs, and Zoo Tycoon: Marine Mania. It is no longer available from most stores, but can still be ordered online.

Zoo Tycoon features 45 different species of animals (over 50 species after downloading the bonus animals). Here is a complete list of the animals featured in the original game:

There are two known unlockable animals in the game:

The following animals were first included in Zoo Tycoon: Complete Collection before being released as bonus downloads in 2004, alongside new animals for both expansions:

Zoo Tycoon has a feature where the player can research new buildings, animals, staff education, etc. With each expansion pack (Dinosaur Digs, Marine Mania, Complete Collection) there have been additional search options. This is the only way that a player can add animal houses, meaning bird houses (Aviary), Insect House, etc. It is also the only way that the player can add endangered animals to the zoo, or hidden animals, in the cases of Dinosaur Digs and Marine Mania. However, there have been certain cheats that can unlock all of the researchable things.

Zoo Tycoon Demo includes 4 animals common in real-life zoos: the Lion, the Bengal Tiger, the Reticulated Giraffe, and the Thomson's Gazelle, although only male animals can be adopted. There are several buildings and scenery from the full game. There are only 2 staff available for hire: Zookeepers and Maintenance Workers. 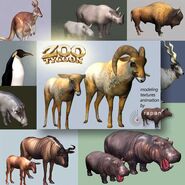